Jennifer Mendelsohn arrived on the literary scene in 1975 with the publication of her first novel, The Book, the gripping tale of an author making his way in London. Never one for formality,  Mendelsohn did all the illustrations herself. On white looseleaf paper. She also was completely unfazed by the fact that she was, at the time, a second grader living in a Long Island split level who'd never actually been to London. Write what you know? What-EVER!

Her sophomore effort, Homonyms Are Words, was widely seen as a disappointment, with Michiko Kakutani calling it "derivative ... lacking the searing honesty of her earlier work." 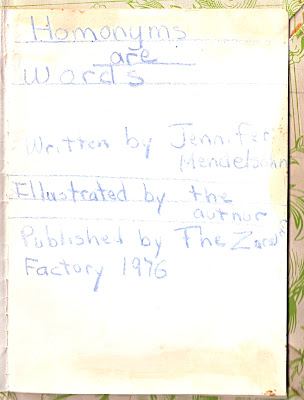 Mendelsohn took her first stab at newspaper journalism in the summer of 1980, when she interviewed Mets' center fielder Lee Mazzilli for the kids' section of Newsday. It was also the first and last time she led off a Q and A by noting dreamily that the subject had kissed her, post-interview. 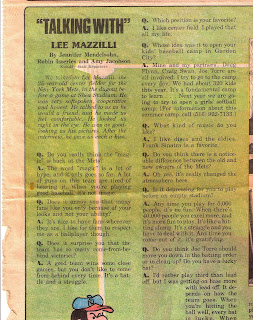 Ten years later, after graduating from the University of Virginia, (despite having written her undergraduate honors thesis about Less Than Zero and Bright Lights, Big City) she moved to Washington, DC to begin an assault on the journalistic establishment. After wetting her feet at The Wilson Quarterly, The Associated Press, and Time-Life Books, where she never did get to meet Judy the phone operator, in 1994, Mendelsohn lit out on her own and began a long career as a freelance magazine and newspaper journalist, starting with a stint as a Washington-based contract correspondent for People magazine. Her assignments for People included covering everything from White House state dinners and a teen virgin conference -- true love waits, people! -- to spending much quality time in West Virginia reporting on the JonBenet Ramsey murder. She also once had lunch with Gilligan.

Mendelsohn's work, much of it about popular culture and entertainment, has since appeared in numerous national and local publications including The New York Times, The Washington Post, USA Today, The Baltimore Sun, Family Circle, Washingtonian, McSweeneys and Slate, where she wrote the "Keeping Tabs" column, a satirical bi-weekly wrap-up of the content of the supermarket tabloids. She regularly profiled celebrities for Gannett's USA Weekend and found an unlikely specialty in the world of 1990s country music, a development that would lead her not only to go shopping at a Las Vegas mall with a teenaged LeAnn Rimes but to spend a leisurely afternoon four-wheeling with Brooks and Dunn. (For a story that was, in true freelance fashion, eventually killed.) Mendelsohn also worked with several of the magazine's contributing editors -- Dr. Drew Pinsky, Tavis Smiley and George Foreman -- helping them write regular columns and essays.

In 2004, Mendelsohn paired with television fashion guru Carson Kressley to help him pen his first book, Off the Cuff, which debuted on the New York Times bestseller list. Two weeks before the book's publication, Mendelsohn and her husband had their first child. A second son joined the family three years later. After a hiatus of several years as a stay-at-home mom, Mendelsohn returned to freelancing. From 2011 to 2014, she was a "Top Cop" for the US Weekly Fashion Police. Recent work has appeared in Jezebel, McSweeney's and the Huffington Post. From 2013 to 2015, she wrote the "Modern Family" column for Baltimore Style magazine. Hopefully, she will never have to write about herself in the third person again.

Who Am I? Why Are You Here?

Real advice for real brides. From a former bride named...me.

So what does tk mean anyway?

Learn here about the world's most convenient phrase.